FEMINISM: WOMEN WHO STAND UP TO IT 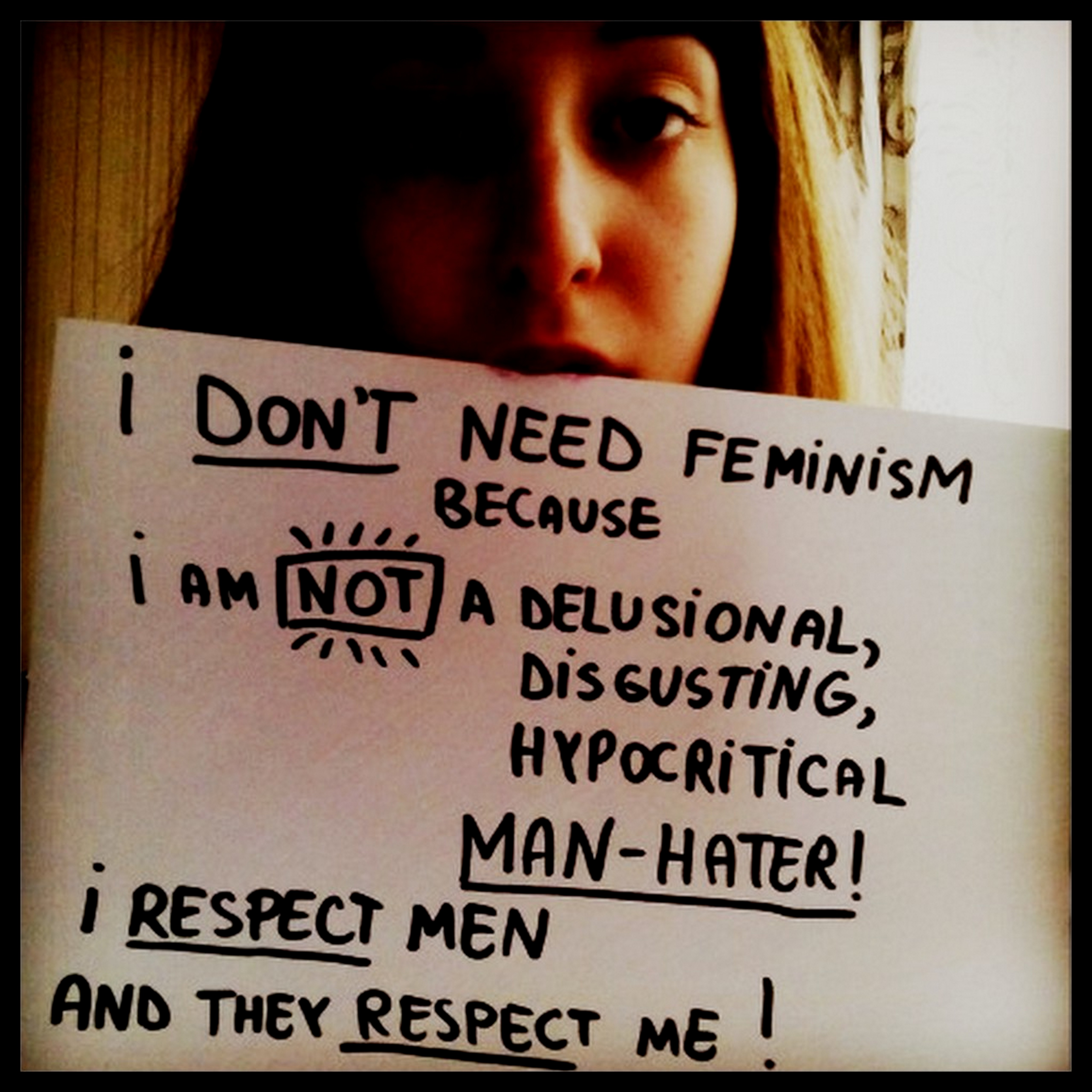 FEMINISM: WOMEN WHO STAND UP TO IT

I’d be lying if I said I don’t agree with some parts of feminism. Apart from my adherence to Patriarchy, I do believe women were more respectable than they are today. Otherwise, why would men have sorted to make families with them? The divorce rate was lower. Teenage pregnancy, substance abuse, mental illness and family values were better then than they are now.

Women lived far more comfortable lives. Since Feminism, more women objectify themselves. Drug abuse, maiming themselves with tattoos and body piercings, getting drunk and having fatherless children. Nowadays, many women than ever before, are not even worthy of being a girlfriend, let alone a cherished wife. Many had willingly subjected themselves to sodomy with at least two men before they reached the age of 30. On average, many single women have settled for men with a minimal virtuous prospect.

Feminism’s call for equality has failed
ever since it urged women to resent men while demanding special treatment
in a quest for “equality” when most really want to be superior.”

It no longer represents female equality. It has become a false claim to male oppression. This movement argues that all women can do whatever all men can do. But science readily supports the natural, physical or emotional differences between males and females of all species. Feminism’s call for equality has failed. It urges women to resent men while necessitating A particular treatment. Most feminists now want to be superior to patriarchy. Family being the most significant aspect of life, this movement demonizes its patriarchal structure. It accuses all men of being successful alpha males. Calling for wives and daughters to rebel against all gentlemen with romantic inquisitions. 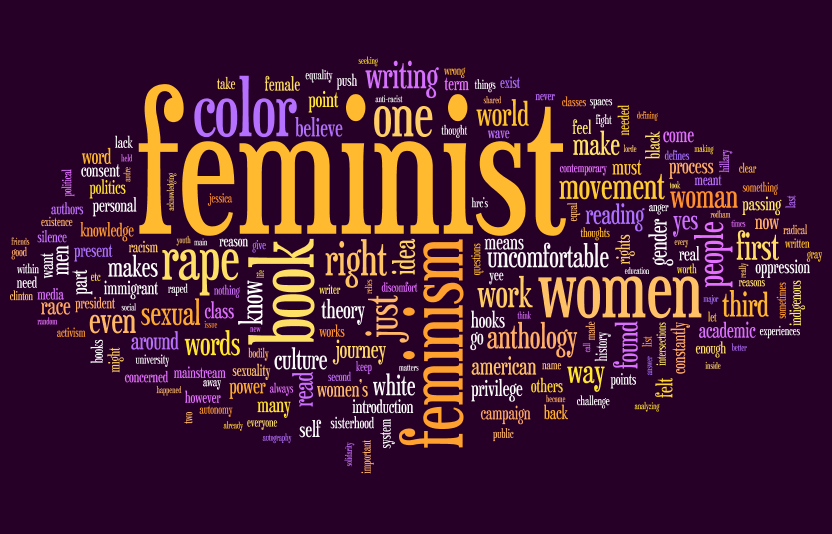 This mentality is a far cry from civilization or natural procreation. Feminism would be great if it didn’t compete with masculinity. Since all achievements are based on hard work and prospect rather than the disrespect for tradition. Since the rise of modern-day Feminism, pornography has become cheaper. The observance of a nude woman’s body is no longer sacred. For example, where men sort to marry a beautiful woman before, now they do not consider a woman with the same beauty a more than a one night stand. Even the Playboy magazine no longer sees a need to exploit female nudity since that appeal has lost its value. Feminism has sold women so cheap, most boys have already seen everything a woman should sexually value for herself. This is disrespectful.

Meanwhile, feminism forces hardworking, respectable women to level up in terrible jobs. Places where demanding tasks push their physical ability beyond the limit. This pressure has caused a severe level of stress on many who are also single mothers. And in the name of “independence,” there are more single mothers today than ever before. At its best, feminists invite women to view themselves as potential victims. When on average most societies hold women in high esteem. It calls for insolence and encourages women to overlook a masculine man’s accomplishment. When you interpret this, you find that even with the few women who can afford all of their needs, it is still a beautiful gesture when someone does something sweet for a woman. Feminists are also taking this gesture away from men.

It appears to hate femininity and deliberately rebel against a man’s genuine attempt to lead, support or protect a woman. And to me, it’s not that women should not be independent or free to make choices that society does not approve. It is the comparison to men and the generalization that all men have the same “privilege.” It paints men as bullies advise some men to use drugs and alcohol while dressed provocatively in public. And society taints the pre-warning that the reckless behavior could provide an opportunity for rape, as evil lurks, as blaming the victim even when the woman that the person is warning is not a victim at that point. The society understands that the potential rapist is not a rational person who cares about the dignity of women but willfully misinterprets warning women as the same as blaming them. 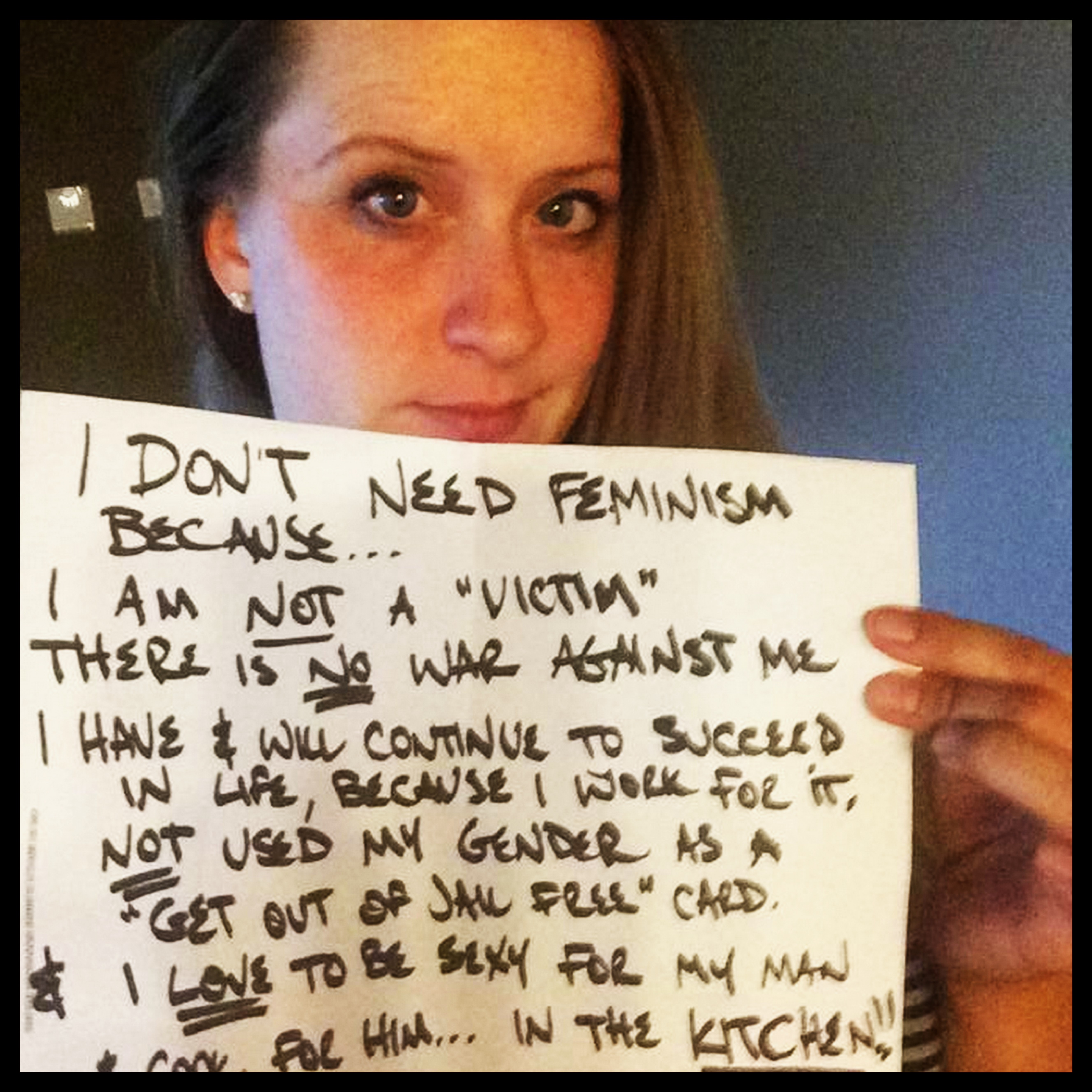 A feminist mentality is illogical and dangerous to all women. What’s the beef? Men want to “keep women in the dark ages so they can cook for them, clean their house, wash their clothes, give back rubs, love, have sex and raise their babies?” Is this the evil plan? What about all the things men have done to make life easier for women? Have men prevented women from creativity? Do the court system not legally entitle women to one half of their husband’s net worth (even if he earned it before he got married)? If he happened to be stressed one day and asked her to leave him alone, does this means he doesn’t appreciate her? Do women need to be “liberated” from the men who took care of them by claiming something is wrong with other women who want to please their man?

…In order to avoid being his anchor, she should become bitter, live alone,
make her own money and raise kids alone?”

…In order to avoid being his anchor, she should become bitter, live alone, make her own money and raise kids alone? Yet, when she decides to obey the media and split up her family society prevents the man from moving on with his life? Is this the equality today’s Feminists call for? Everyone thought it was going to be about equal education and employment opportunities for females as opposed to similar liberty to abuse various substances, engage in careless sexual indiscretion or resentment against alpha men. Do we deny that some men have abused women? That many have suffered from injustice? Today, at an alarming rate, young women volunteer for men to sexually abuse them on the internet. Fron online dating to the posting of sexually explicit selfies on social media to outright stripping on a webcam to sending out nude photos of themselves to random fling-mates.

No! Men too have been abused and mistreated. The relationship between a man and a woman is supposed to be based on love, respect, and understanding. If she spoiled him, he’d reward her in return by taking her out, help her with tasks, buy food, clothes, and jewelry, contribute to child care, offer her time to rest and go out with her friends, run her bath and pour her a glass of wine. At what point did not get hired as the CEO of a fortune five hundred company or not being elected as president or prime minister result in the bastardization of all men? If a woman wants to achieve she has to prove herself, like everyone else.*