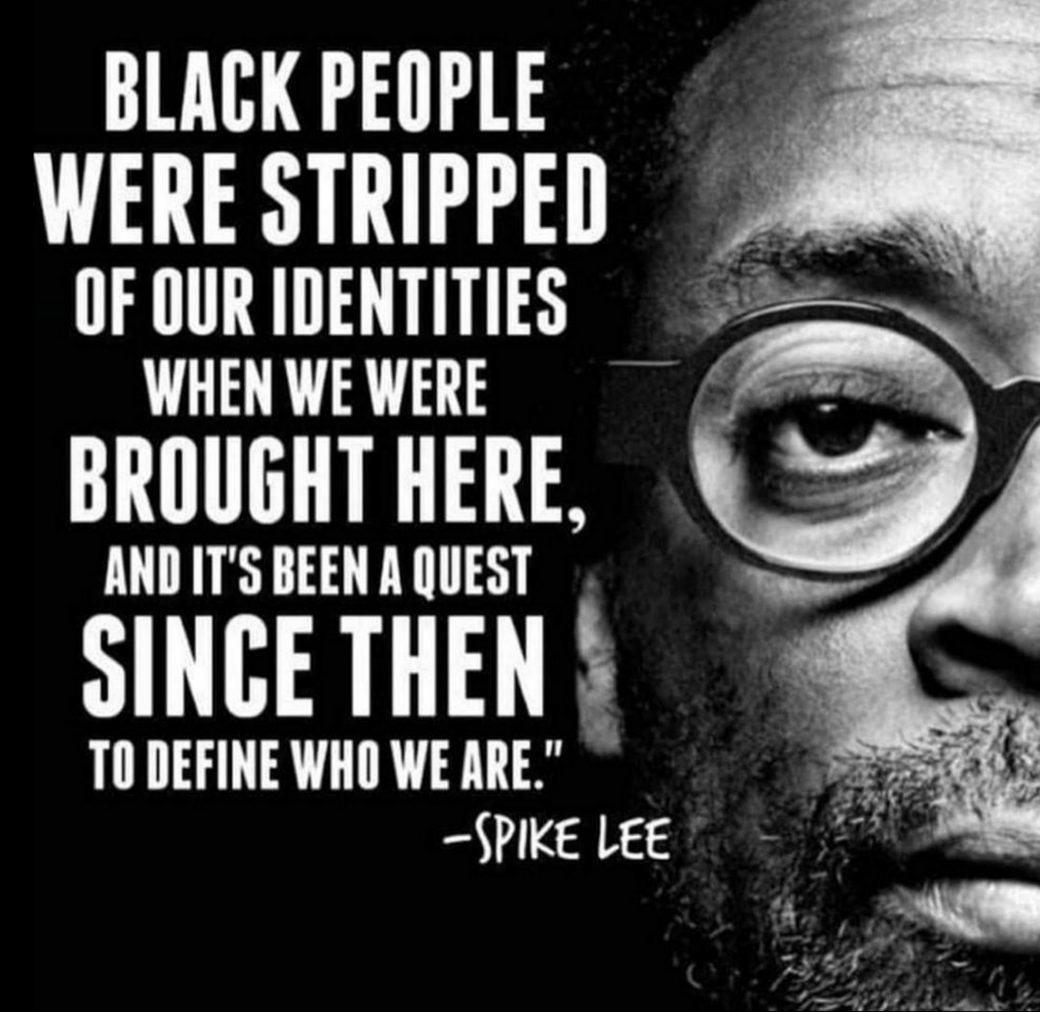 This conversation began when DJ Mike Stoan posted a meme on his wall. The meme read: “Black people were stripped of our identity when we were brought here, and it’s been a quest since then to define who we are.” – Spike Lee. Fascinated (as I always am with many of DJ Mike Stoan’s posts) by the powerful message on this meme I commented that I don’t entirely agree. There are Africans in the West who can teach black people about their lost heritage. Africans even have tribal rituals that they can use to initiate any black person into an African tribe. I suggested that all black people need to do is come willingly and be prepared to strip away the western culture and mentality that they currently have. Black people need to give Africa the same respect that they give to the proverbial “white man.”

DJ Mike Stoan: “So weren’t they stripped of their identities or not? Wouldn’t need an African to teach you anything if you already knew who you are. Why just join any tribe when you can be from the tribe you actually come from? Would you just join any tribe just for shits and giggles?”

Ricky El Perico: “Of course, this is true, fam. That’s what slavery does – complete assimilation. Besides the colour of our skin, most of our cultural identity is what we’ve been forced to do and taught to believe. Most of us have become so comfortable with the new identity that when you tell man dem about their history, they’ll argue the euro/American argument. They’ll laugh or even mock the culture of our ancestors, call them ignorant because we think we know better. SMH. Then they created B.E.T to mass brainwash us. Because we feel like now we have something that’s ours and we could relate. Therefore accepting it wholeheartedly with no question because we went so long without nothing. Basically, whoever runs the media can dictate what being black is even if they’re not black and have an evil agenda.” Ricky El Perico chimed in with this aesthetic contribution.

Why just join any tribe when you can be from the tribe you actually come from? “

Freddy Will: “That is why I do not entirely agree. I agree with the first part of the statement. Yes, during the process of kidnapping the Africans and transporting them to the plantation, they stripped them of their identity. They lost their religion, tribe, family, homeland, and heritage. However, I do not agree with the second part of the statement that says, “and it’s been a quest since then to define who we are.” Here I see hope for black people to integrate into Africa. The problem I’ve experienced is most black people do not want to let go of the civilization of their former slave master.

They often try to teach the [whiteman’s] bullshit to Africans which when we reject then the black person feels offended. Once we agree that one has lost their identity, we have to bring them back. How does one join a tribe? You can marry someone from that tribe, or you can choose a tribe that appeals to you, and then you learn the ways. Learn the language, the food, the clothing, the traditions, spirituality, and the music. Do so without trying to bring anything the white man taught you to it. At some point, you will qualify to join the tribal society by way of initiation and from then on you will be one.”

DJ Mike Stoan: “But why just join any tribe if that’s not the tribe you come from? What tribe will just take you in for the sake of it? You being from Sierra Leone would know more about the history of Black ppl returning to the motherland than I do. I also see some Africans holding on to Western Culture in their homelands.” He made an interesting point, integrating back into Africa won’t be a walk in the park. I felt like I needed to analyze some of the methods that Africans have used to cope with the intrusion of the West.

I like learning about culture like that. I’m a mixed blooded person so once I start the search for our heritage…”

Freddy Will: “True that. If you observe you will see that Africans tend to keep to themselves. Africans are quiet members of Western society. We all have two names and speak several languages. We understand that life is not about us but our descendants. Let me use myself as a guinea pig here. On paper, in the books and to the public, my name is Wilfred Kanu Jr. Sometime during my teenage days while in high school, I got too cool to be Wilfred. So, we flipped it backward and came up with Freddy Will. However, in my parent’s house, I’m known only as Junior. When you go to my traditional settings where tribal aunts, uncles, cousins, and servants are, they know me as Lamin. We shortened Lamina, the century-old name of every first-born male in the family.

My last name [Kanu] is an abbreviation of Kanumasala which means God. We shortened this name to Kanu. I’m a Christian, but in my tribe, there is a traditional mode of spirituality that goes back for centuries. So as an African, I have two faces. The one I show to the colonizer or former slavery system and the one I am at home in Africa. For example, in Canada or America, I’m just another nigga. That word stems from the word nigger, and that comes from the corruption of the name Niger or Nigeria. In Africa, I could be a prince. It depends on who you ask. Being African is to have two identities. One is so sacred that certain people cannot even say your name without disrespecting it. So you give them a European title to call you by, Wilfred in my case.”

Ricky El Perico: “I like learning about culture like that. I’m a mixed blooded person so once I start the search for our heritage, I be all over the place. But, I still suffer the same effects. I don’t have that connection to the knowledge so regardless of how I look I’m still more culturally Euro/American than anything else. But, I’m open-minded enough to learn and form something new based off of the ways of our people. Cause we could never with certainty reconnect to our lost past like Mike Stoan‘s point. Like if I’m a Muslim Moore from Andalusia by lineage is connecting with let’s say The Yoruba Orisha culture reconnecting with my true identity?”

Freddy Will: “Your spirit knows. You have to trust it. Keep in mind that the Moore could have been a Yoruba or any other tribesperson. Remember what I said about Africans having to adapt to two identities? We do that to meddle in the European sphere without them disrespecting our ancestral heritage. Moore is what the Europeans knew those black people as. Those Moores safeguarded their familial secrets by posing as such. As you decide to become an African what do you do? You forget everything you know about Western civilization and education.

You take one of those genealogy DNA tests. That gives you a ballpark region of Africa where your ancestors originated. Then you research all the tribes that come from that region. As you do that you will begin to notice patterns in your natural behavior or belief system. Those patterns match with a specific ethnic group in the area. You may believe you lost your identity but what you may not have is a way to identify your identity. Meaning the way you walk, the way you think, the way you react, how you love, etc. You could trace your current traits back to your ancestral traditions.

Trust your spirit as you notice particular similarities in your behavior and thought process with a specific tribe. It will tell you, and you will feel the connection. Don’t dismiss it, follow through. Start to learn the language, the food, the music, the tradition in marriage and funeral, the spirituality, the clothing. Learn the tribal perspective and begin to see the world as an African. At that point, you would connect with your ancestors and discover your real name. When that happens, the elders will notice you. They will begin to interact with you. Soon after, they will initiate you.”*